I have long been interested in combining the repeater and automata

in one watch. I was certain that it would be possible to utilize the

power of the repeater to power the automata, but I was not sure

what type of "automaton" would be most suitable for my watch.
I took a bit of time-off and visited a small country side inn.

When I was leaving, I looked up and I saw a "origami crane"

made of glass hang from the ceiling. Origami is the traditional play

for kids, but very brain stimulating craft, which basically make

everything from one sheet of paper. So, the crane I saw was,

although made of glass, the crane made of paper by Origami

technique.
That was when the inspiration came down to me and I started

drawing the design immediately upon my return - a repeater watch on which the Origami crane flies.

Quite honestly, I had not had ample experiences looking inside

the repeater watch except for the knowledge from various books

and documents, so it was extremely challenging for me to add

mechanism. My brain was somehow constrained to the

"round movement" and I could not really decide which parts put

where. Then, again, I had an opportunity to see Japanese traditional

enclosed and constructed with lots of secret function to make it

locked and sealed even against water and designed to float for

certain period of time)", and I decided to make the watch to appear

like that. Then the parts fit in nicely in the rectangular position.

The schematics was completed, but there were so many parts which

includes lots of levers and springs, so it took really a long time and

effort to make them all by hand. Having had to re-do many processes, there are still lots of room to improve,

but here it is, the working prototype is completed. It was the

greatest reward for me to actually feel and experience the difficulty

to make repeater watches in the past and how great those

watchmakers were. And I hope you feel the same way by seeing 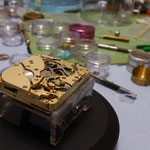 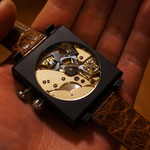 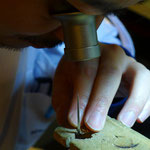